You are always gorgeous in Kimono whatever the place
MISAYAMA is at the central place of Kyoto and it is very convenient for you to go to famous tourist attraction place.
Visit Kyoto in Kimono and make your own different memory♪ 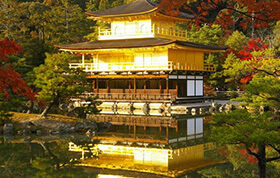 Kinkaku-ji (金閣寺, literally "Temple of the Golden Pavilion"), is a Zen Buddhist temple in Kyoto. It is one of the most popular buildings in Japan, attracting a large number of visitors annually. It is designated as a National Special Historic Site and a National Special Landscape, and it is one of 17 locations making up the Historic Monuments of Ancient Kyoto which are World Heritage Sites. 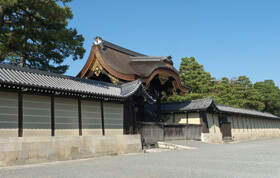 The Kyoto Imperial Palace (京都御所 Kyōto-gosho) is one of the active palaces of the Emperor of Japanand has the longest history as the capital of Japan. The Emperor declared Meiji Restoration and Charter Oath at this place in 1868. The following year, the Emperor moved into Edo castle, currently Tokyo Imperial Palace, but he ordered the preservation of the Kyoto Imperial Palace in 1877, which is still used as an active palace. The palace is situated in the Kyōto-gyoen (京都御苑), a large rectangular enclosure 1,300 metres (4,300 ft) north to south and 700 metres (2,300 ft) east to west which also contains the Sentō Imperial Palace gardens. The estate dates from the early Edo period when the residence of high court nobles were grouped close together with the palace and the area walled. 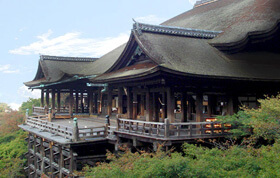 Kiyomizu-dera (清水寺), officially Otowa-san Kiyomizu-dera (音羽山清水寺), is an Buddhist temple in eastern Kyoto. The temple is part of the Historic Monuments of Ancient Kyoto (Kyoto, Uji and Otsu Cities) UNESCO World Heritage site. Kiyomizu-dera was founded in the early Heian period. The temple was founded in 778 by Sakanoue no Tamuramaro, and its present buildings were constructed in 1633, ordered by the Tokugawa Iemitsu. There is not a single nail used in the entire structure. It takes its name from the waterfall within the complex, which runs off the nearby hills. Kiyomizu means clear water, or pure water. 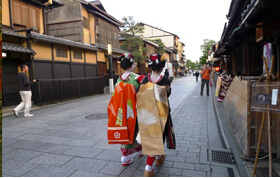 Gion (祇園) is a district of Kyoto, Japan, originally developed in the Sengoku period, in front of Yasaka Shrine (Gion Shrine). The district was built to accommodate the needs of travelers and visitors to the shrine. It eventually evolved to become one of the most exclusive and well-known geisha districts in all of Japan. The term Gion is related to Jetavana. There are also many modern entertainment establishments in Gion. 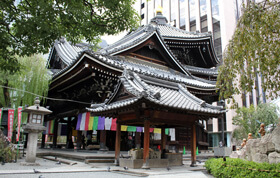 The Rokkaku-dō (六角堂) is a Buddhist temple in Kyoto, Japan, said to have been established by Prince Shōtoku. The name comes from its main hall's hexagonal shape. Rokkaku-dō was instrumental in the development of Jōdo Shinshū. In 1201 CE, Shinran undertook a 100-day retreat. He had a dream on the 95th day, seeing Prince Shōtoku, who directed him to another monk, Hōnen. Shinran subsequently became Hōnen's disciple, establishing Jōdo Shinshū within Hōnen's Jōdo-shū. 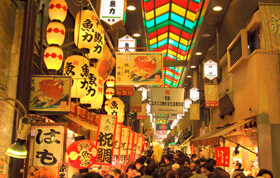 Nishiki Market (錦市場 Nishiki Ichiba) (literally "brocade market") is a marketplace in downtown Kyoto, located on a road one block north and parallel to Shijō Street (四条通 Shijō-dōri) and west of Teramachi Street (寺町通 Teramachi-dōri). Rich with history and tradition, the market is renowned as the place to obtain many of Kyoto's famous foods and goods.